What I Did This Weekend

AKA Monday Annoyance that I cannot get everything accomplished that I wish to. One of the things I had hoped to do was FINALLY finish the post about the Rue de Mouzaïa, where I walked with the wonderful Peter of Peter’s Paris last DECEMBER (!) — photos here . It’s a charming little area tucked away in the center of the 19th arrondissement about which I have been meaning to blog since he and I met and had our adventure over three months ago (!!). But dirty floors and dishes called, and then I noticed the toilet really needed a good scrub. There were emails that needed to be written and a few posts read. Friends to be called. Food to prepare. All kinds of things which have interfered with my sitting down to knock out a post about the journey. I kept thinking to myself, “I want to post once a week!” and here I am, a week after my last post. So, I am going to do a quick (for me) post (go grab that cup of coffee or glass of wine. See you back here in a ‘sec).

One thing I wanted to share is that Keith at the blog A Taste of Garlic has featured my blog in a review at his site. I was really honored to be included amongst the other blogs about which he’s written. I also loved what he had to say here, and feel it was dead on:

All blogs are different; thank goodness for that.

An Alien Parisienne won’t be to everyone’s taste but it certainly is to mine.

Sometimes I fancy a quick beer and sometimes I want to linger over a glass of port.

An Alien Parisienne is a blog to read slowly and savour; sat in a comfortable armchair rather than propping up the bar.

It’s pretty obvious that he noted I, as I like to put it, “blog long.” I’ve written (usually with some distress) about this fact ever since I started blogging in earnest in December of 2005. I’m often scattered, making segue from topic to topic (sometimes with obscure connection), and I am more like Proust or Tolstoy than Hemingway when it comes to prose. I’ve TRIED to blog in concise, 500-1000 word increments. It. Does. Not. Work. I just can’t. It’s unnatural to me. So yes, there are references to my blogging  long in his review, but I am most pleased that he felt at home here on An Alien Parisienne. Thinking of someone wanting to linger at this blog like one might with a glass of port delights me! Thank you so much, Keith. I’ve noted that my stats today took a big jump, too, and that is nice. Welcome, new readers.

I also did a few things this weekend, the most important of which was get a new haircut: 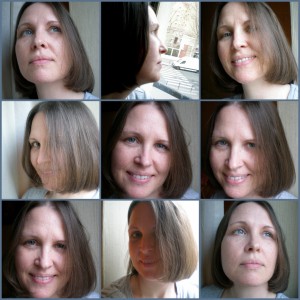 So there you go. It is now a basic bob. I finally grew out my bangs to chin length (it took a year), but I had this layered thing going on as a result, which was driving me bananas.

Here’s what I mean: 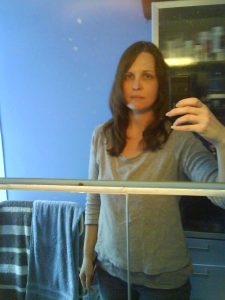 Me, looking like a zombie. I'm not THAT vain, else I would not post this photo (lol).

Sorry. Crappy bathroom dirty mirror zombie pic. I had the basic bob already there, but then there was a lower part of which the longest  layer went to between my shoulder blades. I loved having long hair, I just got really sick of the variation of lengths. I am really *missing* the longer hair, though. I felt like a hair amputee when washing it last night. I was having that phantom limb symptom, except that it wasn’t painful and wasn’t a limb. I just kept trying to wash hair that was not there anymore. Anyone else ever experience that?

The Little Princess part of me is mortified at having her long locks cut (memories of a pixie cut gone bad in the 1970s, which scarred me a little as a kid. You know, it was one of those mom-is-justifiably-tired of combing out the snarls from the weeping, screaming child’s locks kind-of-things, and my shoulder-length hair was one day snipped into a Mia Farrow cute, cropped ‘do. If I had been the mom of me, I would have done the same thing in that situation, so no faulting her, but as the kid I was a bit traumatized). The Grown Up in me keeps saying “It’s going to grow, and now it will grow at the same length and same rate!”  I am dealing with my Inner Child. It’s actually pretty cute, and she’s coming around to it.

I used to change my hair all the time. I have had every hairstyle from the pixie cut in the 1970s, to a femullet in the 1980s (oh man, you should look at this site: mulletjunky dot com. It’s hilarious and gross and hysterical all at the same time! My femullet was not as gross as some there!),  to going G.I. Jane in my 30s.  Short, long, permed, platinum, ruby, black, and purple-streaked, I have done just about everything to my hair since I have had hair to mess with. I had eight-year-old dreams of looking like Dorothy Hamill, teen dreams of being a hybrid of Molly Ringwald and Bono (yeah, that was the femullet), and then some kind of weird, mid-life crisis during the über-short platinum phase. I often resort to coming back to the bob.

For a while there, Keira Knightley and I were hair twins. She cut her hair off for her role in “Domino” and I had my hair about the same length when she did it.  She then let it grow out and so did I. We even cut bangs about the same time, and now I note that she is letting hers grow out. Check this article out with recent pics of KK. See? About the same thing going on as mine had with scraggly ends. I bet she shows up with a bob soon.

It was an interesting experience getting my hair cut in a salon here in Paris. It was the first time I have done so since coming to Paris 21 months ago. In the first year I was here, I cut my hair myself. Then this past summer when I was in Canada, I had it cut by a real hairdresser. All of that, describing the experience here in Paris as well as all the neuroses surrounding my fear of getting my hair cut here in Paris, are worthy of a blog of their own. I don’t know if I will ever get around to it, but it is not going to happen right this second. I have to get ready to go to yoga in a moment.

The other thing I did this weekend was watch movies on our Free Home Video subscription with Freebox. Paul and I watched “Jurassic Park III,” “Master and Commander” and then this IFC film called “The Undeserved,” which is so entitled because it did not deserve to be watched (haha). Naw. It was just really, really… Independent Film Channel-y. Very film-festival-y. One of those where I was rolling my eyes, mumbling, “Just be OVER already!”

Why didn’t I just turn it off? Well, I am one of those people, that is “in for a penny, in for a pound” when it comes to movies. I am a pragmatic idealist. This means that while part of me is whining, “Turn it off already!” the rest of me is hoping that the film will get better. If it doesn’t then at least it becomes fodder for making fun of it, with peanut gallery-style commentary.

Speaking of, I saw the movie “Chloé” last Thursday, and swear-to-Odin I started laughing at the end. When one of the main characters jumps out of a window to commit suicide. Yeahhhh. Not cool, but I could not help it. It was utterly ridiculous, the whole movie, which is too bad as I really love Liam Neeson and Julianne Moore, and also think the young Amanda Seyfried is an up-and-coming talent. It’s a pretty movie, but it is basically an excuse to show lesbian porn. It was so much like a movie I would have tried to stay up late when I was 14 and watch on Cinemax. It might have been a movie I would have walked out of, if I were the type to do that, but Paul was kind of into it (what guy wouldn’t be when actresses like Julianne Moore and Amanda Seyfried get it on?) and after a while I really wanted to see where the disaster was going, kind of like the clichéd expression about train wrecks.

This weekend, I also caught up on episodes of Season One of L.A. Ink, which my best friend Janet burned for me when I was in Antibes last month.

Another weekend in Paris.

(*snort* I kind of think my life is like one of those movies you would want to walk out of, but don’t because you think/hope “Maybe it gets better from here.” I guess I am here to continually remind you, “Wherever you go, there you are.” There are people leading ordinary, boring lives in Paris, too, folks. It ain’t always all that, kids! Just sayin’.)

Thank you, new people who subscribed and I hope to be back here soon with that post on Rue de Mouzaïa! For now, though, I have to get ready to go to yoga class.

14 thoughts on “What I Did This Weekend”