Spring arrives in Paris at the Jardin du Palais Royal

Hello all. I hope that your week so far is going well. Mine is doing all right. Some things have been wonderful this past week; other things have been very, very difficult. You know. Life is usually that way: a bit of extremes at both ends that somehow blends into something middling. That was my week.  We had a fairly uneventful weekend this past one. One thing I accomplished was giving the girl child’s room a good cleaning. We went through old things, dusted and vacuumed, tossed, and reorganized.

Girl child is going to be 13 at the end of the month, and her grandma, my future MIL, is coming here (arrival is Friday the 23rd) to help her celebrate. Grandma came out for the boy child’s 13th birthday a couple of years ago as he was being Bar Mitzvahed and so she is doing the same for girl child’s special day of saying good-bye to childhood and hello to the teens (no official Bat Mitzvah here, though. They aren’t the thing in France the way they are becoming in the States).

I want things to be clean for the fMIL. A woman of good midwestern stock of Anglo-Saxon descent, she makes me want to clean, you know? Some of you know what I am talking about. There’s never anything said outright, but there is this kind of standard that you know you are living up to  just by the subtle things she says and does. Or maybe it’s all in my head… I don’t know. There is this thing with being a ([an] almost) daughter-in-law, however, that some of you will know: there is the kind of mom (every mom?) where you know as the woman in her son’s life you are being watched closely. On the surface of things she may totally have a “live and let live” attitude, but you know that somehow inside of her there are judgments being made as to your suitability for her precious boy. It’s never overt. Confrontation is completely out of the question (it’s a midwestern ideal of folks of a certain generation to avoid that elephant in the living room, right?). But you sense and know as one female animal to another that the pecking order is being established, and we all know that cleanliness is next to godliness, even if we are pretending that laissez-faire housekeeping is okay. So you clean.

The other reason I have wanted to clean is that the girl child’s room was making me nuts. She has a semi-bunk bed from Ikea. High enough that there is a little play space underneath the bed, it is too low to house another bed below it. The “play area” was turning into the Giant Dustball from Hell as stuffed animals, books, “science projects,” the Rock Collection and the toy baby carriage, stroller, and shopping cart she no longer plays with were vying for which object could attract the most dust. I am very allergic to dust, and keeping it clean is something important to me. Then there was the part of me saying inside (see? I guess THIS is how we know the MILs are saying judgmental internal things to themselves — we do it, too), “Does this girlie REALLY need an entire collection of 75 Kinder Egg toys she has been collecting since 2002?”

(A pop can “music maker” filled with chickpeas. I’m pretty sure this was made during the era of the artsy-craftsy girlfriend, B, who was in the picture circa 2003-2005. “Fugly Craps” my best friend, Janet, has dubbed these kind of “art” projects.)

I made a deal with her. We would use the camera to take photos of the things that had good memories attached to them, but with which, knowing she has photos to commemorate the items, she is willing to part. The fugly crappy music maker was tossed.

This one she was loathe to throw away, even though we took a photo of it: 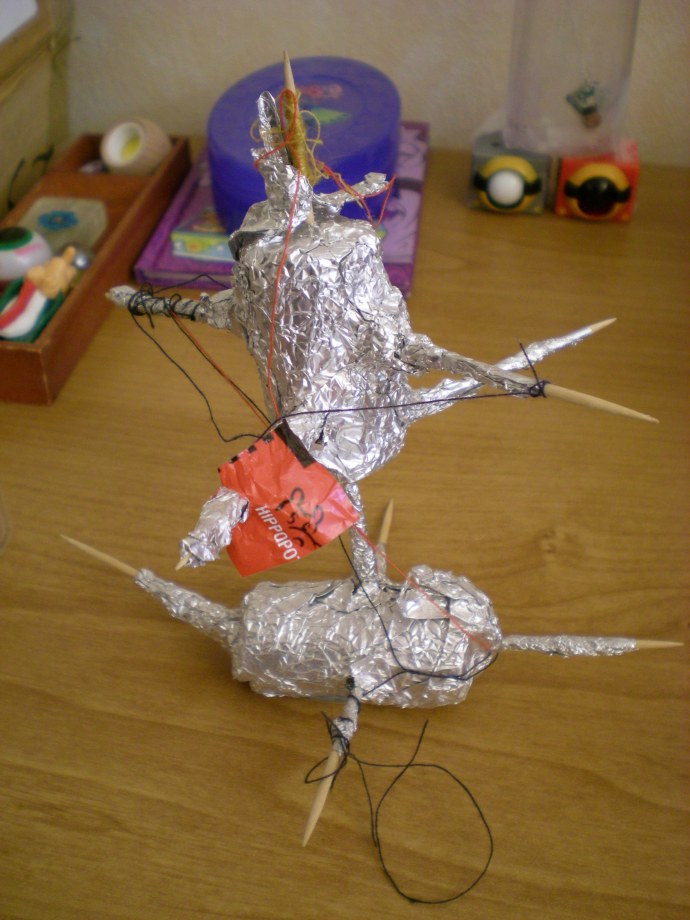 It’s a “satellite” which she was particularly proud of having made out of corks, tin foil, and toothpicks. I gotta hand it to the kid, she IS creative! But, I had to pick my battles. She was willing to throw away these Happy Meal toys:

I’m wondering what tie-in these came from. Chicken Run, maybe? No idea. The pic turned out cute, I thought! They are now residing in some landfill somewhere. (Ignore stained wallpaper from humidity on the window glass in winter dripping down. Perhaps more on that in a future Ghetto Living in Paris installment…)

I’m trying something a little different today. A shorter post, hahaha! Wow. I know. No one have a heart attack or anything. I actually had hoped to blog a little more about my friend Tess and on my Ikea Dreams as well as a little more on Ghetto Living in Paris, but I am actually going to stop here. Sorry if it is not “Paris-y” enough for you, but I threw in the springlike photo of the Jardin du Palais Royal where Paul and I went on Easter Monday.

Here. I’ll Paris things up a little in closing:

It’s the view of the ET from my friend Tess’ new apartment where I am going tomorrow again for lunch. If it is nice, we are going to try to go to the Trocadéro and/or the Champs de Mars. I’ll take pics. Right now, though, I have to head to Leader Price to get a chicken to roast. She does not have an oven in her apartment and has not had a roast chicken in a while (although rotisserie chickens are everywhere, the spice mixture they use in the roasting often has gluten, and she is trying to watch her intake, too).

Hopefully, I can stick with  shorter postings like this one! I have a jillion things I would like to write about, but have determined that not everything is going to make the cut. I want to try to post more often is why. We’ll see. This is a start at it, anyways.

39 thoughts on “A Little Spring Cleaning”